By Amanda BridgemanSeptember 27, 2016Travel
No Comments

I recently arrived back from a trip to the USA where I attended Worldcon and had a much-needed holiday. It was absolutely fabulous and I thought I’d share some of the highlights with you.

You can read about my time in LA here.

You can read about my time in Kansas City for Worldcon here.

New York was my third stop, and had long been on my travel bucket list. I had a ‘significant’ birthday this year, so I decided to treat myself and finally cross it off my list!

I had a bumpy start, though. Arriving late on a Sunday night, thanks to a delayed flight from Kansas City, my pre-paid shuttle never showed. I waited for two hours only to be told I’d have to find other means to get to my hotel because apparently they couldn’t find a shuttle to pick me up. As you can imagine I was not happy. It was late, I was tired, and this was my first visit to New York. I was a stranger in a strange city and suddenly stuck. It wasn’t the welcome I’d been expecting.

Everyone had always told me how fantastic New York was, so I was expecting to be blown away. And at first, I wasn’t. Yeah, it was great to finally see all the iconic places I’d seen on TV and heard about before, but I was left feeling like everything was hitting around 75% and I was expecting 100%. That, folks, can be the downside when people ‘overhype’ a destination for you. It’s always best to keep your expectations in check so you’re not disappointed. That said, by the end of my week stay New York City had grown on me, and I found myself nodding and saying: “Yeah, this place is cool.”

So what did I get up to during that week?

This was pretty much a day of travel and delays and the bumpy start. See above.

Given my late arrival, I naturally had a sleep in. In fact, I didn’t wake up until 10am. Ooops! Not how I’d planned to spend my first day in New York… Despite that, I still managed to spend about five hours checking out Midtown Manhattan: walking into Times Square, visiting Grand Central Station, the New York Public Library, the Chrysler Building, and I also climbed the Empire State Building for some pretty cool views!

I  purchased a 5 day New York Pass for my stay, which I ordered before I left on this trip, so that was my ticket to see most things. Day Ten saw me start the first of my two day Hop-On-Hop-Off pass which was included. I started with the Downtown Loop and basically spent a jam-packed day checking out all its sights. The company that ran these were called The Big Bus company. If you do these I’d recommend starting early. By about 10am there is a long queue to get aboard! Some of these bus companies supply you with pre-recorded audio information (like the one I did in LA), but these ones in NYC have live tour guides that you can ask questions of.

I’m torn as to which I prefer. With a pre-recorded tour, you’re sure to get all the basic info you need, however the bus driver needs to align their driving with the stops to ensure you don’t miss seeing anything as it’s announced! With the live tour guides, you’re relying on the information they supply you and some are more knowledgeable than others. Some are also more pushy than others – as one guide literally stood at the steps of the bus with his cap out for tips and gave people dirty glares if they didn’t put anything in. I understand these people rely on tips, but standover tactics tend to leave a bad taste in your mouth.

My first stop was Battery Park where I caught a ferry to the Statue of Liberty. Now this was something that people always told me was disappointing. I had always heard that it was much smaller than you think it’s going to be. Perhaps because of all this ‘talk’ I wasn’t expecting much from Lady Liberty, but I was actually impressed when I finally saw her. She was bigger than I thought she was going to be, and I found her to be really quite striking. So this was a case of reverse-hype happening, which isn’t such a bad thing if you’re left pleasantly surprised! 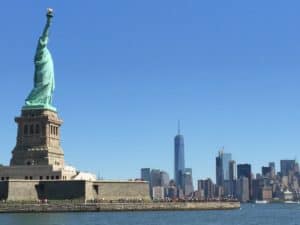 Next, I grabbed some lunch and walked up to Wall Street. I gave the famous bull statue a little rub on his ribs, which apparently gives you good financial luck (and actually thinking about this – it has!). As with my visit to Times Square, I was quite surprised to see the level of security present. Although surprised isn’t really the right word. I understand why it was present, but perhaps found it a little confronting to see cops so heavily armed.

After Wall Street I walked over and paid a visit to the 9/11 Museum. It was quite haunting to see the memorial, to see the wide open space where the towers once stood. More than that, to see the waterfalls and see the names of all those that perished in the buildings, on the planes, and among the rescue teams. The museum itself was interesting. There were plenty of artifacts on display, footage to watch, eyewitness accounts to read/hear, etc. Some may think this is a bit of a depressing thing to do on a holiday, but I couldn’t imagine a visit to New York without  it.

To finish off the day, and something much more relaxing and pleasant, was a walk along the High Line. Once a disused railway track, it has been turned into a pretty walking path, complete with park benches, a little strip of cafes, and views over the Hudson River and various spots of Manhattan. Nice!

Today, I focused on the Uptown Loop of my Hop-On-Hop-Off Bus. The main focus of which was to visit the Museum of Natural History and check out Central Park. I’d always wanted to visit the museum and was glad to finally do so. I didn’t quite have the legs to check out all the exhibits though, so I focused on all the animal ones (including the dinosaurs). I’ll have to check out the cultural exhibits next time.

With regards to Central Park, it was on my list to find Strawberry Fields for the John Lennon memorial. I’m a Beatles fan, so this was a must for me, although I have to say, I thought it was going to be larger! This is another example of things that were made to look that more spectacular on screen. I should note the bus tour also took us past the Dakota apartment building where John lived and was shot on the doorstep. Again, a little morbid, I suppose, but it was an important part of music history.

Today, I gave myself a break from sightseeing and did some shopping instead! I walked over to Macy’s to check out the 9 floors of retail it offers. That’s a lot of shopping! I also strolled around the area, popping into other stores until my feet complained.

I went back to my hotel to chill out for a while, before heading out again to see the Rockerfeller Centre and go to the Top of the Rock for some nice dusk views over Manhattan. I got up there a little early and had to wait a while for the sun to set so I could take some nice shots, but it was certainly a nice view. I have to say I was glad to get my feet on the ground again, though!

This day was pretty quiet, as I had a friend flying in from Canada to meet me for the weekend. I still managed to take a walk and check out the UN complex, though. I would’ve loved to have taken a tour but they were booked out.

Fulfilling my love for eating in old diners, I stumbled across one on the way back from the UN and ate some lunch there. Well, when I say lunch I mean pancakes. I love stepping back in time. I was also trying to eavesdrop on conversation at the next table as two men from a TV station I’d passed along the way were sitting discussing what they were going to work on next. Couldn’t quite hear them though. Damn!

That night, my friend and I checked out our hotel bar which overlooked 42nd Street, before we went to a seafood restaurant near the Rockerfeller Centre, recommended to us by our hotel barman. Following this we took a walk into Times Square to see it in all its glory at night. It was a nice evening.

Together with my friend, I finally hit the NY subway, and I have to say it was a nice relief from all the

walking and the Hop-On-Hop-Off buses I’d taken all week. We pretty much did a tour of all the areas of Manhattan I was yet to catch a glimpse of, namely Soho – for some window shopping, Washington Square Park – famous for the Chess players as seen in many films and TV shows, Union Square – where there was a farmer’s market, the Flatiron building – where we stumbled across the filming of a Katherine Heigl production (most probably her TV show Doubt), another visit to Central Park and a quick visit to the famous Tiffany & Co. store. Phew! Somehow we managed the energy to then go to see the Broadway production of Wicked that night, which was great!

Alas the next day it was time to leave NYC, and although she didn’t blow me away with her first impression, she certainly grew on me over the course of the week.

And that, my friends, was my rather busy week in New York. Next stop (and next blog post) – Miami.

Amanda is an author and screenwriter. She is Tin Duck Award winner, an Aurealis and Ditmar Awards finalist and author of several science fiction novels, including THE SUBJUGATE which has been optioned for TV. She is also a two-time feature film pitch finalist for Universal (AU) and AACTA.