The US Diaries – Part One – LA

By Amanda BridgemanSeptember 13, 2016Travel
No Comments 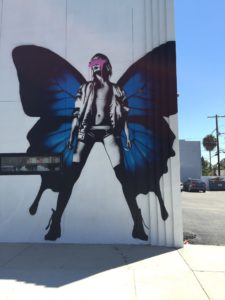 I recently arrived back from the USA where I attended Worldcon and had a much-needed holiday. It was absolutely fabulous so I thought I’d share my travels with you.

Now when I say ‘much-needed holiday’, it’s probably not the type of holiday you had in mind. I’m a bit of a ‘sightseer’. I do like to relax on holidays, sleeping in and the like, but I tend to pick holiday destinations based on all the things I can see, do and experience. When I say much-needed holiday, it’s more like I had a break from working: working the day job, working on the books, even reading and watching TV – which I did little of while I was away. For me, this holiday was all about getting out and about in the sunshine to live in the real world for a while.

This trip to the US was my third. The first visit was back in 2005 when I joined my brother and his wife in Las Vegas and the Grand Canyon. On my second visit in 2011, I met up with some English friends and did a roadtrip through California. This visit I travelled solo, touching both coasts as well as middle America!

Not wanting to arrive at Worldcon jet-lagged, I decided to have a few days in LA first to acclimatize. I’d been to LA before and had such a great time that I wanted to go back and see a few things I missed out on last time.

The first day is always a killer as you leave Australia first thing in the morning and arrive in LA first thing in the morning – and in between you’ve travelled 14 hours (or more if you’re from Perth on the west coast of Australia like me). Needless to say on that first day at some point you need to have a little nap just to make it through to the evening. So that’s what I did. I checked into my hotel then took a little nap. I did manage to pull myself out of bed mid-afternoon, however, and took a stroll along Hollywood Boulevard, checking out all the famous sights and paying a visit to Larry Edmunds Bookshop which sells all sorts of Hollywood biographies, film-making text books, retro movie posters, and copies of original shooting scripts for films such as Aliens, Goonies, Lethal Weapon and Goodfellas.

After an early dinner at Mel’s Diner, a bit of a Hollywood staple and tourist attraction, I made my way to the HollyShorts Film Festival. I had tickets to the Sci-Fi block of screenings, which was being held right next to my hotel at the TCL Chinese 6 Theatres. Nine short films were on offer from a variety of countries/filmmakers, which were great to see, but the highlight for me was when the Directors present stood up at the front and did a short Q&A with the MC. It was interesting to hear about the journey of each of their films and some of the issues they had to overcome along the way. After that the HollyShorts Film Festival was screening the Thriller block of films, and I would’ve loved to have stuck around for that, but alas, the jet-lag was calling me back to bed.

Did I mention it was warm? Yes, funny that being summer. Day two saw me get a little sunburn! I jumped on the Hop-On-Hop-Off bus and did a circuit re-familiarising myself with the layout of Hollywood, West Hollywood and Beverly Hills. During my last visit I never had time to check out Melrose or Beverly Hills, so they were on my list this time around.

I stopped off at Melrose and strolled around checking out all the shops. There were so many vintage clothing stores which were interesting to take a peek in. Word of warning though, I wouldn’t bother visiting Melrose before 11am as nothing seems to open until then. Those Hollywood lushes are still in bed!

During my last visit I went to Universal Pictures and Warner Bros Studios, which were both awesome, so this time I turned my attention to Paramount Studios and undertook a VIP Tour. It went for 4.5 hours and included a glass of champagne and lunch, which were lovely.

There were a few TV shows filming while we were there, including School of Rock and Scream Queens. We caught of glimpse of Jamie Lee Curtis walking back into the Scream Queens stage, and also one of the kid actors from Nicky, Ricky, Dicky and Dawn coming out of his trailer. The tour took us not only all around the Paramount lot, but also to the archives, prop warehouse, signmakers workshop, the Paramount theatre and the Paramount restaurant for a behind the scenes look. It was great!

After that, I had to fight crowds on the footpath near my hotel because it turned out the premiere of War Dogs was on (Starring Jonah Hill, Miles Teller and Bradley Cooper). Unfortunately I was in a rush to get back to my hotel to change for a dinner reservation, so I couldn’t hang around and watch, but I did manage to spy Miles Teller on the red carpet! 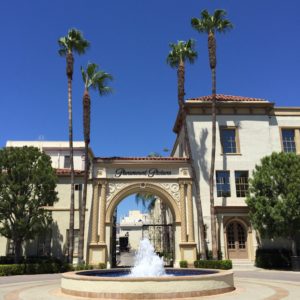 The original entrance of Paramount Pictures

That evening I went to the Hollywood Roosevelt Hotel, better known as the home of the first Oscar ceremony and also as having been the home of Marilyn Monroe was also a resident there for two years as her modelling career took off. I dined at Public Kitchen while enjoying a nice white from the Napa Valley, before more jeg-lag once more called me to bed.

I was planning to start the day with breakfast at Carney’s (a café set up in an old train carriage) but alas it wasn’t open as yet, so I ventured into BeverlyHills and had brunch there instead at The Farm of Beverly Hills (an affordable option for that postcode!). After strolling around and seeing how the rich folk live, I decided a little pampering was in order, so I headed back to my hotel for deluxe facial and massage at the Exhale Spa – which were both great. On the way I noticed people setting up for yet another movie premiere, this time the new Ben Hur film. Alas, I had another dinner reservation, so I couldn’t stick around and watch again.

For my last night in LA I dined at Musso & Frank Grill, something I’ve wanted to do for a while. Not only is it the oldest restaurant in Hollywood, but it has also had several film and TV productions shoot there, including Mad Men and Ocean’s Eleven. But more than that, I just wanted to sit there and soak up the history and wonder what those walls must’ve seen. Its clientele over the years has included many greats from the film and literature worlds – from Charlie Chaplin, Douglas Fairbanks and Rudolph Valentino to Greta Garbo, Humphrey Bogart and Lauren Bacall, to Marilyn Monroe, Elizabeth Taylor and Steve McQueen, to music folk like Janis Joplin, to the likes of Johnny Depp and Harrison Ford today. Also, iconic writers such as Raymond Chandler (who is said to have written most of The Big Sleep there in the restaurant/bar), Charles Bukowski, T.S. Elliot, Aldous Huxley, John Steinbeck and Kurt Vonnegut, etc. I’m not one for writing in public places, but I would’ve loved to have cracked out my laptop and sat there typing away!

So, that’s all the time I had in LA. Next stop (and next blog post): Kansas City and Worldcon!