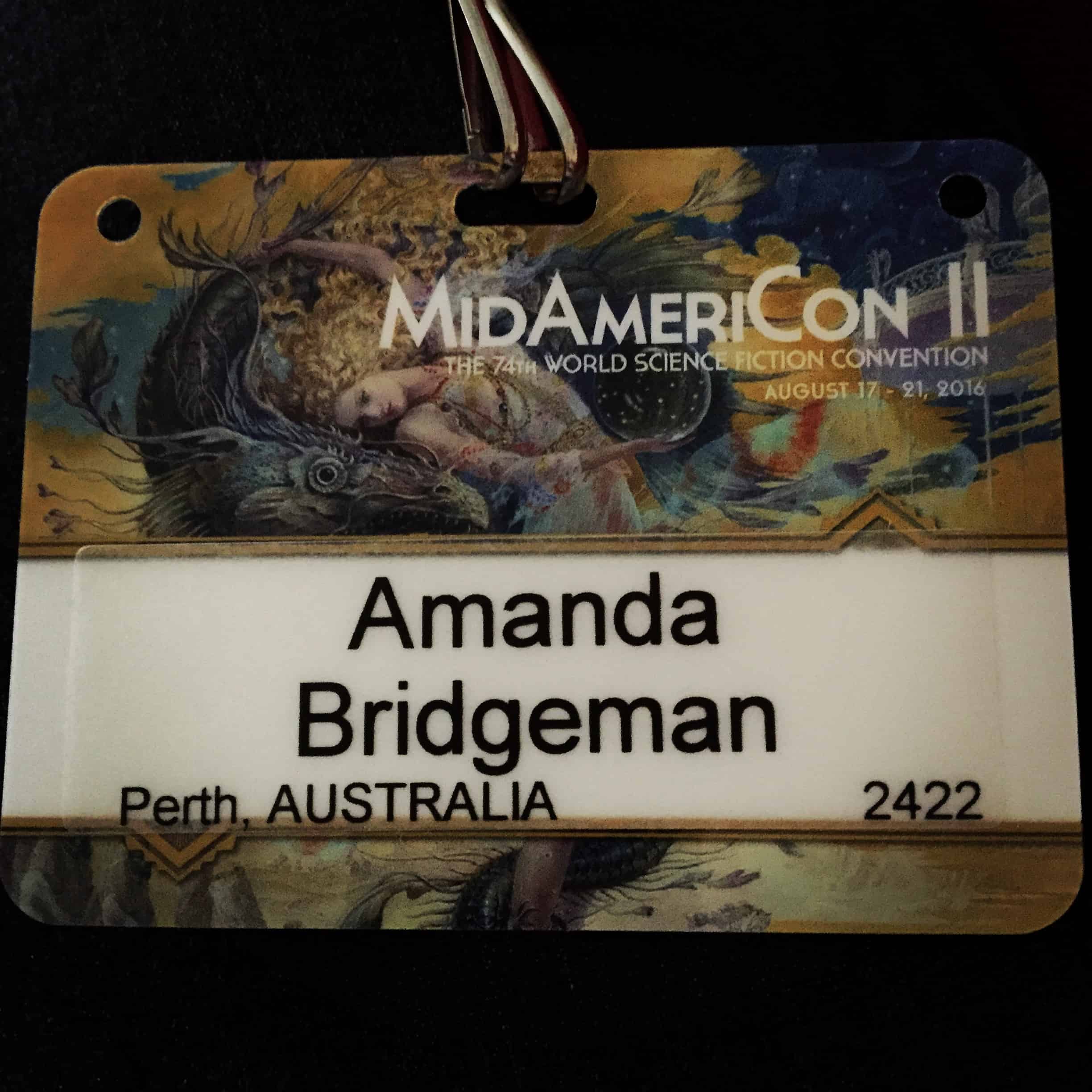 The US Diaries – Part Two – Kansas City and Worldcon

By Amanda BridgemanSeptember 18, 2016Travel
No Comments

I recently arrived back from a trip to the USA where I attended Worldcon and had a much-needed holiday. It was absolutely fabulous so I thought I’d share my travels with you. Click here for Part One, which covered my stay in LA.

This year’s Worldcon – MidAmeriCon II – was held in Kansas City. It was the second Worldcon I’ve attended, the last one being LonCon in London, England, in 2014. I have found them to be so beneficial to attend – not just for spreading the word about my novels and reaching new readers, but also for my own personal development as a writer. You get to hear from so many experts and big names you admire, that it’s really quite inspiring.

Today was pretty much filled with travel as I made my way from LA to Kansas City. It was interesting to see the differences between the two cities, however. Despite how much I enjoy visiting LA, I have to admit that outside of the main tourist haunts – Hollywood, West Hollywood, Santa Monica, Beverly Hills, etc, the outskirts of LA aren’t that attractive. It is almost a bit of a flat, concrete, wasteland. Kansas City, however, was the opposite. It was lush and green and quite pleasant, no doubt thanks to the Missouri and Kansas Rivers which feature in the area. The city centre itself was also clean and tidy, so I had a great first impression of the place.

Today was the first day of the Con for me. I checked out the large exhibition hall where all the stalls and displays were, then I managed to catch a few panels, including “Authors Before, During and After the Adaptation Process”. It had a great panel line-up with Charlaine Harris (author of the Sookie Stackhouse series upon which True Blood was based), Steven Gould (Author of Jumper – turned into a film starring Hayden Christiansen, and he’s also been working with James Cameron and four screenwriters to develop 4 x Avatar sequel novel adaptations), and Melinda Snodgrass (a writer/producer currently working on Wildcards for Universal Pictures and she also writes and co-edits the book series with George R. R. Martin). It was a really interesting panel and great to hear the views on both side of the fence – from the writer’s perspective and also the Hollywood Producer.

That afternoon I moderated my first panel of the con -on Australian SF – and it went really well! I was on the panel with internationally respected podcaster and anthologist Jonathan Strahan (who funnily enough is from Perth but I’ve never met him before), author David McDonald (who among other things has written tie-in novels for Captain America and Guardians of the Galaxy), and GUFF ‘Fan’ Delegate Clare McDonald-Sims (no relation to David, I believe). Anyway, based on feedback from the audience after the panel, they really enjoyed it and welcomed hearing about writers from countries other than the US.

That evening it was back to the exhibition hall for the Bid Parties. Basically all the places vying for upcoming Worldcons put on snacks and drinks to showcase the towns that want to host a Worldcon. People vote during the current Worldcon for the next event (undertaken two years in advance, so they were voting on 2018). The winning bid for 2018 was San Jose, USA. Congratulations to them! And commiserations to New Orleans who put on a great party!  😀

After a 3am finish thanks to the Worldcon Bid Parties, I had a slow start to Friday. But I still managed to catch 5 panels. The highlight was probably the “VFX: A Dialogue Between Creators” panel which featured Bruce Branit and Peter Tieryas, who between them have worked on such Film and TV productions as I Am Legend, Guardians of the Galaxy, Breaking Bad and Star Trek.

I also attended the very popular Tor (Publishing) party, which was jam-packed with people! I behaved myself, though, and called it a night at a decent hour.

This morning I moderated my second panel for Worldcon, on ‘Contracts for Writers’. It gave me a test as moderator as some panellists were a little dominating and I had to manage that. But all turned out alright in the end.

For the rest of the day I attended a whole stack of panels, including a Q&A with NASA Astronaut Stan Love, a really interesting ‘Writing for TV’ panel, a ‘Filmmaking and VFX’ presentation with Bruce Branit, and another really interesting discussion on Literary Agents with a good mixed panel that included agents, a writer, a publisher and a sales/marketing rep for a publisher.

That evening it was time for the Hugo Awards. When I attended LonCon, I never made it to the Hugos, so this was my first experience of them. I have to say, I was quite impressed! It was held in a large theatre and I was quite blown away by how many people attended. There were cameramen filming the ceremony as well and many of the crowd were quite elegantly dressed.

The highlight of the night, however, was being lucky enough to snare an invitation to George R. R. Martin’s after party. Held in a beautiful old theatre, it was a wonderful night that saw The Alfie Awards handed

Alas, I was flying out the next day so that’s all I managed to attend. But all in all, I had a fabulous time.

So that was my stay in Kansas City: Exciting, inspiring, and enlightening. Next stop (and next blog post): New York City.

Amanda is an award-winning writer of both original and tie-in fiction. Her works include THE SUBJUGATE which is being developed for TV by Anonymous Content and Aquarius Films, PANDEMIC: PATIENT ZERO the first novel based on the award-winning board game, and her latest novel SOUND OF LIGHT takes place in Marvel's X-Men universe.