So yesterday I undertook some ‘writer research’ and visited a shooting range with some of my ‘day job’ colleagues. I’d always wanted to give it a go, not because I’m a gun nut but literally because I was interested from a writer’s perspective. After all, the heroine in my Aurora series is a sharp-shooter, so it made sense to give it a try and step into her world, right? 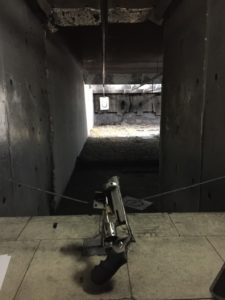 We went to the indoor shooting range with a set budget, so we started on the ‘cheaper guns’ and we split the rounds between us. The woman serving us on the counter recommended which guns we should try for our first time, so we went with her suggestions: the .22LR Revolver (50 rounds) and the 9MM Walther PPQ Navy (30 rounds).

I have to say, I was actually nervous when I entered the venue. Nervous that I was in a place with guns and real bullets that could kill someone. I was pleased to see that everyone who attended this shooting range had to fill out their name, address, phone number and licence number in a register (something the police might need to review at some point should an incident occur), and I was also pleased with their safety measures – ear and eye protection was to be worn at all times and we were escorted from the reception to our individual booth and back again. We were also given a demonstration on how to hold, load and fire each gun correctly/safely.

Me lining up the .22LR Revolver

The booth was a little crowded with four of us in there, but it was nice to have some moral support too. We each took turns, starting with the Revolver, then the instructor came back and gave us a demonstration on the Walther. Again, I was quite nervous as I held each gun and put it down again – knowing that it was loaded with bullets that could easily kill someone. Still I lined up my shots as instructed, channeled a little Carrie Welles, and fired.

I can confirm what most people say – that firing guns is nothing like it looks in the movies. They were heavier than I expected, for one. I tried a couple of shots holding the guns up but relented to rest my elbows (and hence the weight) on the table in front of me, to ensure my aim was straight. I was also surprised to see actual fire shoot out from the gun (you see it in the movies with the bigger guns, but guns of this size?), and surprised at just how must residue blows back onto you.

I was also surprised at just how different the two guns were. I mean, a gun is a gun, right? No, it’s not. The Revolver was bigger, heavier, shot out more fire and residue, yet it had smaller bullets that left neater bullet holes in the target, and it had a barrel chamber – the bullets loaded individually. The Walther (known as the gun James Bond uses apparently), was lighter but had much more kick back – movement upon firing. You need strong arms to hold things steady if you want to fire quickly! The bullets were slightly bigger and loaded in a clip of 10, and seemed to cause more damage going by the results on the target. The Walther also spat out the used shells upon firing, which were bouncing off the wall of the booth as they did.

Another thing I found fascinating was the amount of residue I could feel in my nasal passages and in my throat that was inadvertently inhaled. One colleague even had visible residue on her hand. Upon reading up about this once I got home, I learned how toxic the lead can be for those, like professional shooters, who fire guns regularly.

All in all, I found this an absolutely fascinating exercise. I can see how people may take it up as a hobby – to see if they can improve upon their shooting score, but it would also be an expensive hobby to have ($65-$100 for 30 rounds, depending on the gun chosen).

I’ve always been an avid supporter of gun control, believing that civilians should not have access to guns, and my mind hasn’t changed on that. I think if civilians want to shoot guns, they should go to ranges like that one or join shooting clubs, where the firing of these weapons is controlled in safe environments. And after seeing just how heavy and powerful and loud these guns were, I am more convinced than ever that your average Joe should not be able to get their hands on them. 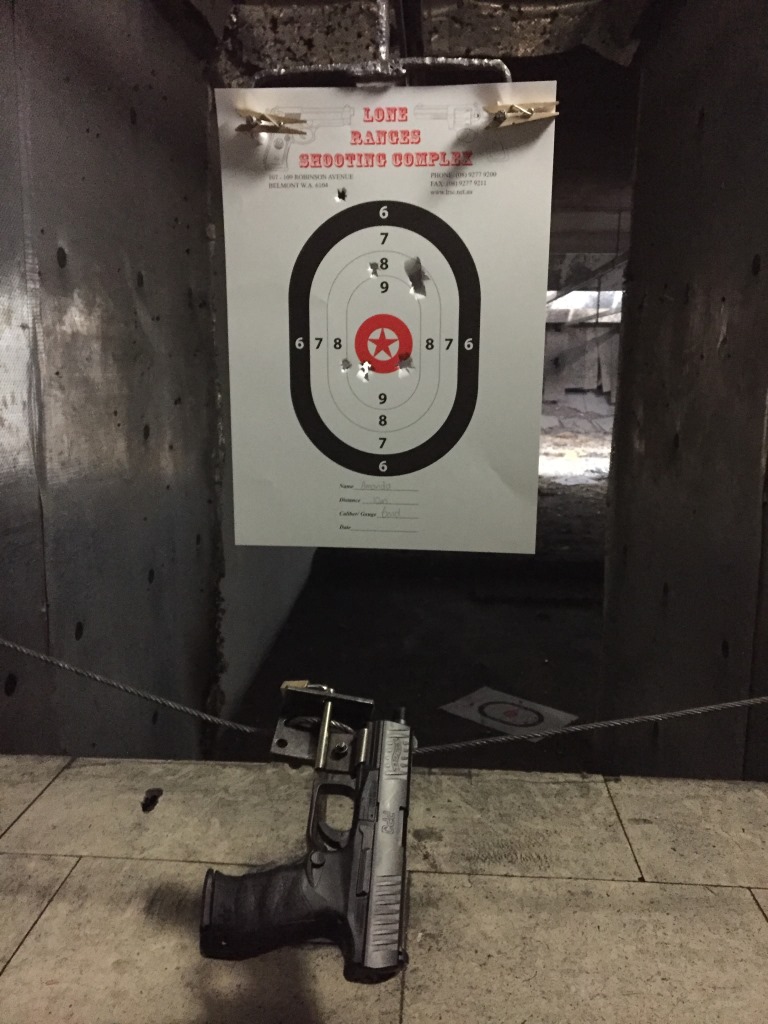 In Australia we have gun control and because of that our police aren’t so itchy on their triggers. They know it’s highly unlikely that the average civilian will pull a gun on them. Police in the US, however, don’t have that reassurance, with guns freely available to anyone. This may explain why some of them are so quick to shoot people. Of course, there are larger (racial) issues going on underneath that I hope the police and the black community can work together to overcome. It’s an incredibly serious problem that needs a resolution fast.

So, will I go back to the range and fire guns again? Yes, probably. Again, out of writer research. Knowing just how different these two guns were, I’d like to try some others – namely those used by the police and the military. But that said, I am more than happy to leave these guns at the ranges and keep them as far as possible from my everyday life.