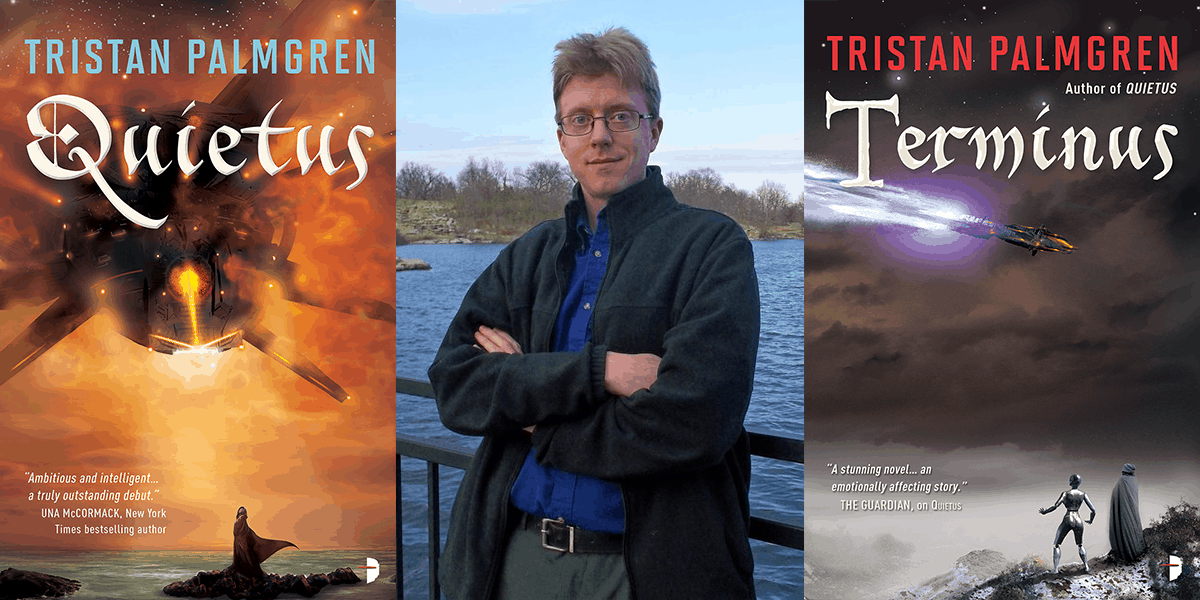 By Amanda BridgemanNovember 7, 2018Writers
No Comments

Today’s special guest is author Tristan Palmgren. Tristan is a fellow Angry Robot author and also my launch buddy – our two books are Angry Robot’s November releases. I met Tristan through Twitter and given we were sharing a launch, I thought it would be a great idea to have him on the blog for a chat. So, let’s introduce him and get on with the questions!

Tristan is a currently working SF/F writer. He earned his MFA in Creative Writing from Bowling Green State University in Ohio. In his various lives, he worked as a clerk, a factory technician, a university lecturer, a cashier, a secretary, a retail manager, and coroner’s assistant. His debut novel QUIETUS, a genre-warping blend of historical fiction and space opera set during the Black Death, was published by Angry Robot Books March, 2018. The sequel TERMINUS is out this week.

How did you come to be a writer? Was it always something you were interested in or did you fall into it?
I started writing in middle school, on a whim, and I haven’t been able to stop. In retrospect, there were a lot of warning signs: hopeless daydreaming, obsessive behavior with books and television and games, no realistic perspective on what life in those industries was actually like, and the false confidence I needed to actually start working and honing my craft.

What were your favourite books/films growing up? What kick-started your creativity as a child/teen?
My favorite things as a child were series with long-established continuities that I could crawl into and never come out. I was started on Star Trek before preschool, and would wander around playgrounds pretending to be Mr. Spock. My reading diet started out heavy on licensed novels, and, later, long series.

The idea that a seemingly self-contained story has a larger context is still very enticing to me. I love the feel of something big, something untouchable and that can’t be entirely seen, framing a story. I will always be here for worldbuilding that evokes that same sense of scale as the universe we actually live in.

Your novel ‘Quietus’ is a ‘contact’ story, but not as we know it. Can you tell us a little bit about it?
The transdimensional anthropologists of Quietus have travelled to 14th century Europe to observe the Black Death as another epidemic devastates their own worlds. They come from technologically advanced cultures, and it’s been a long time since any of them have experienced a tragedy of this scale. They’ve come to research coping strategies, to remind themselves how to deal with death and loss and grief—their own as well as their societies’.

They’re led by Dr. Habidah Shen. Her assignment is not as simple as she’s been led to believe. The pressures of the epidemic back home have led to a cascading series of political failures and intrigue, piling up in her lap. The pressures mounting on her come to a head when she meets Niccolucio, a young Carthusian monk, and the last survivor of his monastery. Defying all of her team members and professional training, she cannot keep herself from saving Niccolucio. Their lives only gets more complicated from there.

What inspired you to write this particular book and set it in this particular era/country?
Reading history! A chapter in Barbara Tuchman’s A Distant Mirror: The Calamitous 14th Century inspired me to read more about the Black Death. I had trouble getting the weight of that loss and suffering out of my head, and I knew I had to write about the way it made me feel. I already had a few other ideas about a multiverse-spanning civilization and just how an infinite multiverse (or infinite universe, for that matter) might allow us to reconceptualize death.

Your sequel, ‘Terminus’ is launched last week in the UK and Australia and is out this week in the US. Without spoilers, can you tell us what to expect from this new book?
Terminus shifts perspectives decades after the Black Death, to the wars of the Italian condottieri. Fiametta of Treviso, a soldier and prophetess, is trying to reshape the way those wars are fought. More than just the weight of her own world is pressed against her. Two former agents of Quietus’s interdimensional empire are trying to figure out who is trying to kill them. They and Fiametta are swept together into a maelstrom of imperial ambition, colonization, war, and remnants of the past none of them can leave behind.

So, with two books out, are there any plans for more in the series?
Sales and publisher willing, I’d love to! I have some plans for a third book. In the meantime, I’m working on a loosely-connected project that shares some of the setting, if not the characters.

There must have been a fair bit or research required to write these books. Can you tell us a little bit about your behind-the-scenes experience of bringing these books together?
I already mentioned Tuchman, and her books are wonderful places to start on any of the topics she wrote about. She’s a novelist’s historian, and draws character, place, and mood marvellously. Other books important to Quietus include Julie Kerr’s Life in the Medieval Cloister and John Kelly’s The Great Mortality. Living near university libraries and having the opportunity to use them has also been invaluable.

If you weren’t a writer, what would your dream job be? Do you have a secret passion that we don’t know about?
I have a job right now that I like quite a bit, managing a small wild bird store. If you’d like to know what seed to pair with what feeders to attract cardinals and keep squirrels away, I’m your person. (The answer is a platform feeder with safflower seed).

What’s the one piece of advice you wish someone had told you when starting your writing career? What do you know now, that you wished you knew then?
My first thought is: “you’re not as good as you think you are, kid.” Given a time machine, though, I don’t think I would. Some level of self-assurance, even false self-assurance, was probably necessary to my development as a writer, in that it gave me the energy to start.

I’m sure many writers think more highly of their abilities before they start than they ever do after a project or two. A first draft will almost always be bad, and the same is true of the first output of a writing career. Only after I finished a few projects and sat down for some critical self-reflection did the things I like most about my work really start to emerge.

What can we expect from you next?
My current project is a space opera, tentatively titled Nihility, set in the same multidimensional empire that Quietus’s anthropologists come from. A group of escaped hostages lose themselves in an infinite multiverse. I’m still fairly early on in on it.

Thanks for your time Tristan!

And if you’d like to buy his books, here’s where you can find them: